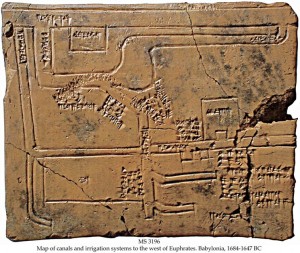 Clay tablet showing a map of canals and irrigation systems to the west of Euphrates, Babylonia (1684-1647 B.C.E.) Schoyen collection, MS 3196

There are so many objects I could have talked about in The 13th Tablet. This is one of them… a fascinating and ancient clay map in Old Babylonian, found in Niru, Babylonia, 1684-1647 BC. It is a clay tablet, 9,5×12,0x2,8 cm, 22 lines and captions in cuneiform script. I shows  a map of canals and irrigation systems to the west of Euphrates, naming beside Euphrates, the Nabium canal, Dadi canal, Ammama canal and Musahhirum, in the Niru district, with 7 captions giving lengths, widths and depths of the canals and the volumes to be dredged, dated 26th day in the month Abe in a year of King Ammiditana of Babylon. It is the only known Babylonian working map of a canal irrigation engineer (read more).

Indeed, so many ancient discoveries could have been the starting point of further mysterious twists and turns in the novel. I finally settled for a subject which had a huge longevity throughout the ages, the QANAT.

A qanat is an ancient water management system still used to this day. It provides a reliable supply of water for human settlements and irrigation in hot, arid and semi-arid climates. The Persians, in the early 1st millennium B.C.E. started digging and building elaborate tunnel systems (qanats) to extract trapped groundwater in the dry mountain basins of Iran. Although it was a costly technology even in ancient times (the tunnels were dug by hand and just large enough to fit one person), it was cost-effective, as it could offer a reliable flow and quality of water to remote communities from Iran and other middle/near-Eastern regions as well as North Africa. The technology itself consisted in the main qanat tunnel sloping gently from the pre-mountainous alluvial fans to the distribution area. Vertical shafts were sunk at intervals of 20-30 meters along the length of the qanat, to provide ventilation/access to repairs. Although most of these qanats ranged between 2 and 5 km some were over 70km long. The inclination or slope depended on how deep one was able to dig.