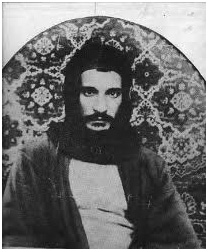 Rabbi Yisrael Abuchatzeirah (1890-1984), affectionately known to his thousands of followers as Baba Sali [Arabic for “our praying father”] was a leading Moroccan rabbi and devoted Talmudic scholar and kabbalist. He was a teacher and holy man among the Sephardic community in Morocco and Israel. His burial place in Netivot, Israel, has become a shrine (The day of his death in 1984 drew more than 100,000 mourners to his gravesite in less than twenty-four hours). His ancestor was Rabbi Shmuel Abuhatzeirah, born in Palestine in the 16th century. This Rabbi Shmuel lived in Damascus for a while, where he studied Torah together with the great kabbalist Rabbi Chaim Vital, himself a disciple of Itschak Ashkenasi Luria (the Ari), the greatest Kabbalist of all time and founder of modern Kabbalah.

The Ari was called “The divine Itschak” or “Arizal”. Although his writings go back 400 years ago, they were still hidden from the general public until very recently. His book, Ets Chaim (Tree of Life), compiled after his death by his disciple Chaim Vital, was the founding work for mainstream Kabbalah up to modern times. This vast compilation, made up of numerous volumes, only circulated in manuscript form amongst mystics for over 100 years, but it was eventually “leaked” out of the circle and first published in 1782.

In the 20th century, among the numerous stories attributed to the devout Baba Sali until the early 1980s, one story is of particular interest to us as it concerns the so-called Ari room which has great significance in The 13th Tablet. The story below describes a trip made by Baba Sali to Safed in 1921 and his “exorcism” of the Ari Sephardi synagogue. Indeed according to legend, until his arrival, the room where the great mystic Ari was said to have been visited by the Prophet Elijah in the 16th century, was closed to all visitors. Whoever entered this recess died a miserable death. Baba Sali entered the room and prayed so intensely that he somehow cleansed the Ari room. Today, the tiny room is kept as a shrine and is visited by thousands of devotees every year. It is our hope that this short extract will give the reader a feel of the mystical atmosphere that still reigns in Safed. This is where the Renaissance of Kabbalah took place in the 16th century after a long hiatus since Bar Yochai wrote the Zohar in the 1st century C.E., a mystical book still central to the study of Kabbalah. It is a strange place, high atop a mountain, where they say the Schechina or Manifest Presence of God still rests above the city.

THE VISIT OF BABA SALI TO THE SYNAGOGUE OF THE HOLY ARI
(A slightly shortened version by Alex Mitchell, based on the story found in E. Alfasi, Y. Torgeman (2011). Baba Sali. Our holy teacher: his life, piety, teachings and miracles. New York: Judaica Press, pp. 27-28)

During his stay in Israel, Baba Sali visited the city of the Kabbalists, Safed. There, he met many great scholars, among them the renowned Rav (Rabbi ) Shlomo Eliezer Alfandri. The two of them, Baba Sali – just over thirty years of age – and Rav Alfandri, who was already past one hundred years of age, discussed Kabbalah for a long time. During this visit, Baba Sali had wanted to pray in the synagogue of the holy Ari, but the building had been locked for a long time and visitors were not allowed. Until then, whoever entered the synagogue met his death. To stop these tragedies from occurring, it was decided to lock up the synagogue completely. Rav Moshe Shetrit, who was one of Rav Yisrael’s first attendants and who was about twelve years old at the time, described what happened when this visit took place.
“One day, not long after we arrived in Jerusalem, the Rav asked me to call a taxi so that he could visit the holy city of Safed. When we arrived, he was greeted by the leading rabbis of the community and escorted to an apartment. After he rested, he summoned me and asked if I would find the person who held the key to the synagogue, because he wished to pray there.
“The Rav went to the synagogue of the holy Ari, and I went to find the key to this barred building. The people of the city led me to an old man. When I requested the key, he refused. I explained that Baba Sali had sent me, but he remained steadfast in his decision not to give me the key.
“It was then that the old man told me how a number of people had lost their lives in the synagogue. ‘I will not give the key to anyone’, he declared. ‘It would be as if I am taking a life.’ I begged and pleaded with the man and said that I could not return to the Rav without the key. After a while, he reluctantly consented. Both Baba Sali and the key had to be bound to the rope in order to be retrieved afterwards, he said, sure that the outcome would be tragic.
“He accompanied me to the synagogue, and I gave Rav Yisrael (Baba Sali) the key. The old man sat on a large rock nearby, trembling in anticipation of the coming tragedy. Baba Sali instructed me to hold on to his garment and enter the synagogue with him. After we passed through the first set of gates, we entered the synagogue’s courtyard.
“Baba Sali walked to the right side of the courtyard, and then entered the synagogue, imbued with deep religious fervour. When he opened the door, a bright light filled his face, a light shining from within the room. Although it was close to twilight, bright daylight filled the room! The Rav then pushed aside the curtain in front of the Holy Ark, unfastened the door and opened a Torah scroll. For several minutes he read from it.
“Afterwards we sat down on one of the benches in the synagogue. Baba Sali turned to me and said, ‘You can now let go of my garment.’ When we walked through the gates, the old man ran to Baba Sali and embraced and kissed him, speechless with joy.
“This visit became the talk of the city, and thousands flocked to the synagogue of the holy Ari after the Rav opened the doors.”